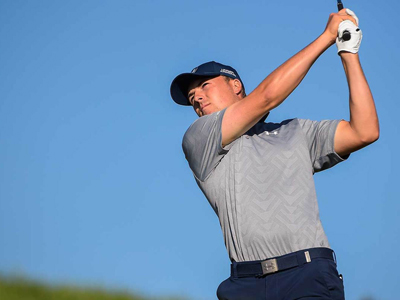 The playoffs were exciting, at times even compelling and I want Spieth’s putting stroke for Christmas. However now the season is a wrap I’d like to make a plea to all those broadcast commentators, golf analysts, foot soldiers and tower-sitters to cooperate.

Cease, stop and quit using the clichés and hackneyed words and phrases that cause listeners to hit the mute button. Heck, if Augusta National can ban any mention of prize money, turn golf fans into patrons and forbid references to bikini-waxed greens we should be able to get golf’s talking heads to find another way of describing what’s transpiring on the screen.

At the top of the list is. “He’s got plenty of green to work with.” Couldn’t it once be described as having enough room to land the ball on the green and let it roll to the pin?

But then there’s the phrase particular to the playoffs, “He controls his own destiny.” Well, depending on your philosophy of life this may or may not be true, but the use in a golf context is way overdone. Kudos though to the golf Channel’s Steve Sands who had the unenviable task of explaining the unexplainable FedEx cup points system during the playoffs. He spoke “controls his own destiny” only a few times though certainly ample opportunity was there to have been unlistenable, a contrast with the unprofessional repetition by Dan Hicks.

“That shot’s right in his wheelhouse.” Ok, I get it but how about, “This shot fits his natural swing” for a while.

Thankfully, “He’s got no chance” is no longer heard and truth be told the late Bob Rosburg the 1959 PGA Champion and ABC commentator for more than 30 years did say it on occasion…but only when it was true.

Johnny Miller’s “green light special” needs no comment—just stop it and the same with “chunk-and-run.”

A “ball-strikers” golf course. That has always mystified me since golf is a game of striking the ball so does it mean the course in question is particularly suitable to those players who hit the ball accurately? I thought all courses were. Maybe someone could ask Peter Kostis since he seems to be in love with the words.

Let’s say Player A is 5 under par and Player B is 2 under par with a birdie putt. Often heard is “He needs this putt to get within 2.” Now to me that doesn’t make sense since to be within 2, would be only one stroke back not 2 so what do they mean? I don’t know and aren’t sure they do either.

Finally, can someone please tell touring pros the use of the royal “we” is ridiculously pretentious. The only possible comment is, “We are not amused.”