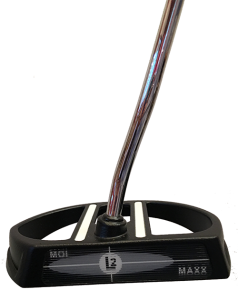 A putter with lots of forgiveness, a large sweet spot and high resistance to twisting puts you on the road to making more putts since impacting the ball even a little off center, as we all know happens fairly often, can easily mean a missed putt.

Enter the L2 MOI MAXX putter the most recent model from Lateral Line Putters LLC. where forgiveness, a big sweet spot and high MOI are the whole idea.

Taking the L2 from the shipping box you notice right away the weight—it’s heavy–in fact the head weight is 620 grams. Contrast that with a “normal” putter with a head weight of around 350 grams makes the L2 more than 250 grams heavier and, as far as we know, the heftiest putter on the market. Designer and company president John Ambrose says a putter such as the L2 with a head of over one and one-third pounds makes for a smoother stroke and more putts going in the hole.

Not only does the head break the upper weight limit it is also physically huge—measuring a full six and one-quarter inches from heel to toe compared to putters we are more used to with heads such as the classic modern blade that are a little over four inches. The extra-large center shafted head due to its size (and weight) also exhibits a sweet spot Ambrose says is eight times that of most other putters, a full three and on-half inches wide. 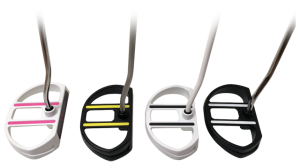 On the course the dual alignment lines on the head visually bracket the ball so aiming is relatively easy and because the L2 has a flat sole along with the heavy head, it actually stands up by itself on the green. It is possible therefore to align the L2 while in the address position then, leaving it standing, to walk behind the line and make a final adjustment. The putter grip is extra-long with a square cross section which complements aiming by putting the hands in the proper placement.

But the grip size has another purpose as well. As Ambrose puts it, “By adding a 200 gram, 16-inch grip to the L2, we moved the stroke motion feel past the hands and wrists and into the arms and shoulders. This allows for a smooth, pendulum motion and discourages the yips.”

After ten rounds on several different courses, all with Bermuda greens and speeds ranging from medium to very quick, we got used to the feel of the L2 which is decidedly different than a “normal” putter. Hitting a seriously off line putt almost never occurred both because of the effect alignment lines and the fact virtually wherever the ball struck the face it rolled with a solid impact. The weight of the head meant the putter was always on line when the stroke finished.

As advertised the L2 is forgiving, perhaps the most forgiving we have ever tested though admittedly that’s a subjective judgement. What is without question though, if you are having problems making solid contact, beset by the “twitches” or still looking for a replacement for your banned belly or broomstick there could be some distinct benefits from this putter.

Negatives: Some may find distance control difficult because the hit is so solid with so much mass behind it. We found on downhill (particularly downhill side hill putts) and on fast greens getting the proper speed could be problematic. The flat sole, while aiding alignment, sometimes catches the grass when putting from Bermuda fringe into the grain. And as long as we are picking nits, the large square grip caused comment from everyone who tried it, not necessarily negative comments but it does take some getting used to. Finally, one players opined that carrying the extra weight L2 for a full 18 holes would be like putting three more clubs in the bag. As I said, picking nits.

Recommendation: If you need help with making solidly impacted online putts the L2 MOI MAXX could very well be the answer. The price is $169 at L2putters.com and shipping is included in the price.