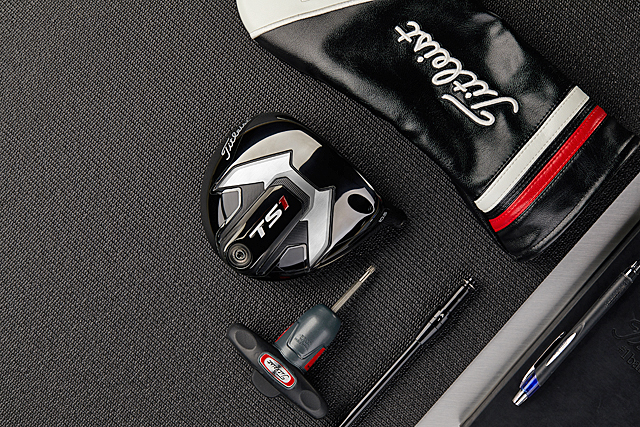 Titleist decided in order to be major factor in the driver business they would have to make and sell drivers that hit the ball farther and get rid of the less distance-too much spin label worn particularly by the 917 model. The competition from TaylorMade Golf and Callaway Golf is impressive. Both are known for innovative designs and when Cobra Golf and PING are factored in the problem Titleist faced was not simple. No one could logically expect competitors of this caliber to sit idly by while Titleist worked on something new.
The answer was the Titleist Speed Project, a multiple year program resulting in the TS line of drivers and fairway woods. First to market in October last year were the drivers, TS2 for recreational players and the TS3 for better players. Both have gained acceptance on the PGA Tour and along with the low-spin TS4 introduced in April have become the most played driver models this season.
The newest (and presumably final) member of the TS driver family is the TS1 targeted at players with slower swing speeds, specifically those below 85 mph which in many cases will be ladies and seniors. The premise is simple and not unique, just make the club lighter and it can be swung faster.
“There are so many golfers that can benefit from the performance of TS1,” said Josh Talge, Vice President, Titleist Golf Club Marketing. “For seniors, women, juniors – really anyone who is the moderate swing speed player – TS1 is an absolute powerhouse. You can swing as smooth and easy as you want, and the ball just takes off. The distance just feels effortless.”

Lightening overall driver weight is a well-recognized technique and several makers have models in the category. Drivers generally weight around 320-330 grams and the TS1 beats that by a significant margin coming in at 275 grams when the ultralight 40-gram stock shaft is used.
“TS1 is designed for golfers who have a driver swing speed of approximately 85 mph and below, and are averaging about 220 yards or less off the tee,” said Stephanie Luttrell, Director, Metalwoods Development, Titleist Golf Club R&D. “By bringing our TS technology into this extremely lightweight configuration and adding a slight draw bias, we’ve been able to produce dramatic benefits for this group of players.”
One caveat of lightweight drivers is they are sometimes less forgiving because of the lower mass plus weight distribution in the head. However, Titleist says the TS1 resistance to twisting (MOI) is “similar to TS3,” the better players model. One other small point the TS1 standard shaft length is 45.75 inches, one-quarter inch longer than the other TS models. A longer shaft will produce more clubhead speed and therefore distance, but this fractional added length should not adversely affect ball dispersion.
The TS1 clubhead is 8 grams lighter than the TS2 with another 20 grams saved by using the Golf Pride Tour Velvet 360 Lite grip. Two ultralight shafts are stock: the Fujikura Air Speeder 40/35R3 (high launch/mid high spin) and the Mitsubishi Fubuki MV 45/39L (mid high launch/mid spin). 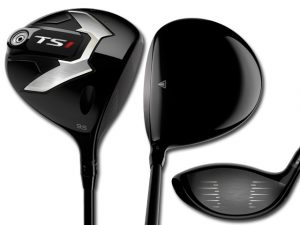 The ultralight Titleist TS1 driver for players with swing speeds less than 85mph.