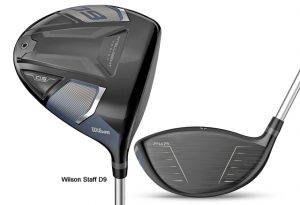 The Wilson Staff D9 driver is designed with the face having hundreds of tiny zones of differing thickness and an enlarged sweet spot plus a 3-layer crown of Kevlar and carbon fiber.

WYNTK:
Wilson has shifted its emphasis of its approach to enhancing driver performance by dropping the idea of super lightweight drivers as with the D7, a game-improvement model from two years ago and the Launch Pad line from 2019. Launch Pad, a super game-improvement anti-slice model had a total club weight of 272-grams which is a full 40 grams less than most drivers.

The new D9 is a more regular weight, not lightweight, with a face designed after a computer analysis of multiple simulated impacts across the entire area giving an end product having hundreds of interior face geometries. Called a Peak Kinetic Response Face (PKR) it is a unique take on the idea of variable thickness faces as seen in drivers by other manufacturers.

The second change is to increase the price of the D9 to $350 or $50 more than the D7 and Launch Pad but still in the lower end of the current price range for one-woods. Of note is the two largest club companies increased driver prices this year by about the same amount putting the prices substantially over $500.

The Wilson Staff D9 crown is similar to what was used in the D7, a sandwich of carbon fiber top and bottom with Kevlar in the middle. This sandwich is lighter than titanium and this lowers the center of gravity which in turn means better ball launch numbers and an easier to hit clubhead. At the rear of the sole is a 10-gram replaceable weight and a 3-gram option is offered. Wilson also made the head more aerodynamic by increasing the head depth but decreasing the crown curvature.